03/11/2022 Yesterday REM Tec has started an exciting new partnership with GALP, world leader in the energy field. We are working on the realization of a pilot project at the institute of agronomy of Lisbon with the intention of researching on different varieties of vines.

17/06/2022 Great participation from all over the world for the international conference on agriculture, Agrivoltaics2022, which was held in the splendid setting of the Catholic University of Piacenza. it was finally an opportunity to meet live and share the experiences and results collected over the years. REM Tec had the pleasure of hosting the participants on the Agrovoltaic® plant in Monticelli d'Ongina, in operation since 2011. See you at the next edition, Daegu, Korea, April 2023!

REM Tec is gold sponsor for Agrivoltaics2022, the European conference on agro-photovoltaics, now in its third edition. This year the event will be held both online and live, hosted by the Catholic University of the Sacred Heart of Piacenza, from 15 to 17 June 2022. For more information on the program and to purchase tickets, visit the event website www. agrivoltaics-conference.org.

12/04/2022 An agreement was signed between REM Tec and Renergetica, a company listed on Euronext Growth Milan of the Italian Stock Exchange (BIT: REN), operating in the development of projects from renewable sources on the international market, owner of its own plant portfolio and active in the sale of asset management services as well as in the innovative smart-grid market. The goal is to jointly develop agrivoltaic projects and guarantee the best possible integration between agricultural production and energy production, thus favoring the energy transition process that today more than ever appears necessary to our country. 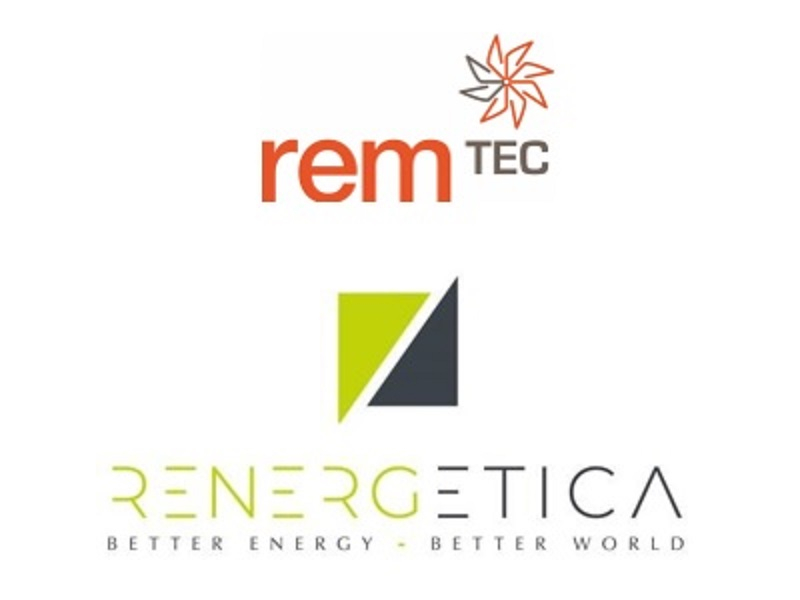 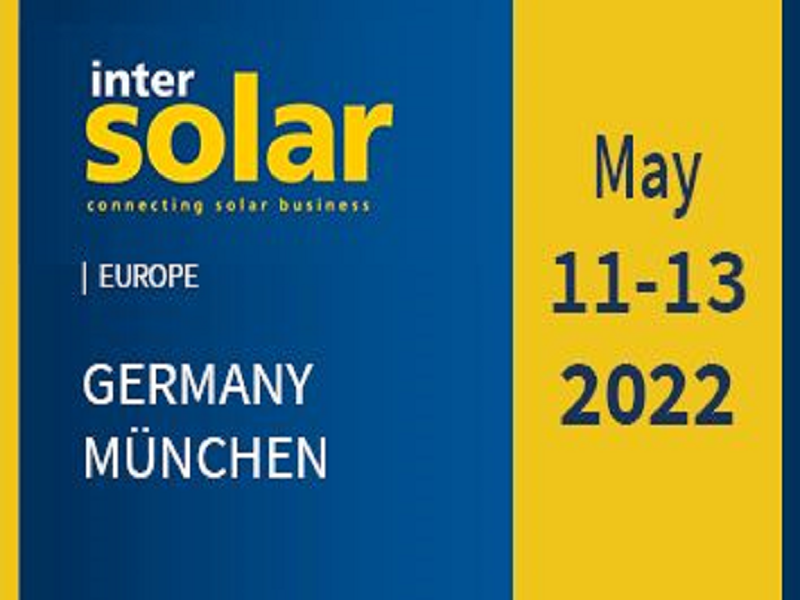 The Intersolar 2021 exhibition ended with huge success, where our new patent “Agrovoltaico Fixed AGV” was presented. A fixed system that allows to have the land available for agriculture.

REM TEC will be an exhibitor at InterSolar Europe from October 6–8 2021.

13/09/2021 Congratulations to our licensee NOTUS SOLAR for the development of new Agrovoltaico® plants in Japan. Here the 834 kWp plant installed in the Onuki prefecture.

11/06/2021 In collaboration with Sun'Agri, Kilowattsol, Altergie Développement and Râcines we announce the creation of France Agrivoltaïsme, the first association for the promotion and definition of Agrovoltaics, which brings together the energy, agricultural and agri-food sectors, the academic world, the financial sector and insurance. The full article can be view in the news

20/10/2020 The first European conference on agro-photovoltaics has ended with great success! The event was held entirely online and saw the participation of more than 350 participants from 38 countries. The presentations are available on demand on the conference portal for ticket holders, which is still available for purchase on the conference website. The REM Tec presentation can be downloaded by entering the news.

08/09/2020 Work has begun on the construction of the first photovoltaic system in Japan by the licensee company NOTUS SOLAR. The plant is located in the Ibaraki Prefecture and has a power of 85.76 kW. 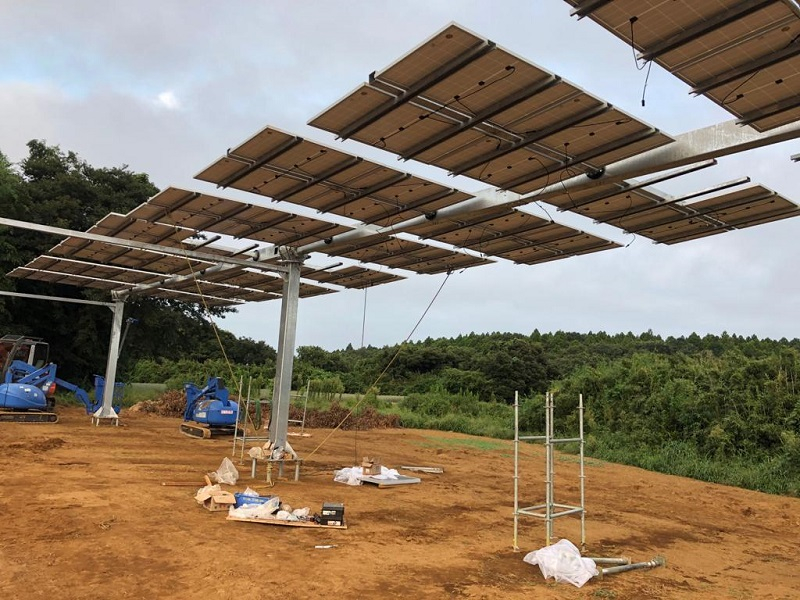 07/02/2020 The 310 kWp plant in Solignano (PR) was built with the formula of the sale of energy. The energy produced by the plant will be 80% self-consumed by the OVAS company, which deals with molds and accessories for the glass industry.

15/02/2020 REM Tec will be premium sponsor for the first european confernece on Agrivoltaics which will take place in Perpignan (France) on 14/15/16 October 2020. For more information, visit the dedicated website www.agrivoltaics-conference.org/. 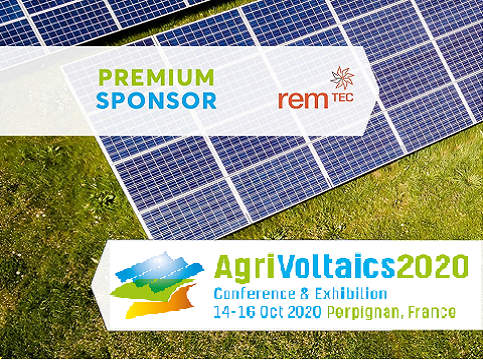 10/11/2019 The first Agrovoltaico® plant in France is operative. The plant consists in 12 trackers for a total power of 117 kW, it was installed in August 2019 using the last release of trackers and bifacial modules.

October 3, 2019 REM TEC signs a new licence agreeement and transfer technology with NOTUS SOLAR, based in Osake, for the development of Agrovoltaico® projects in Japan. 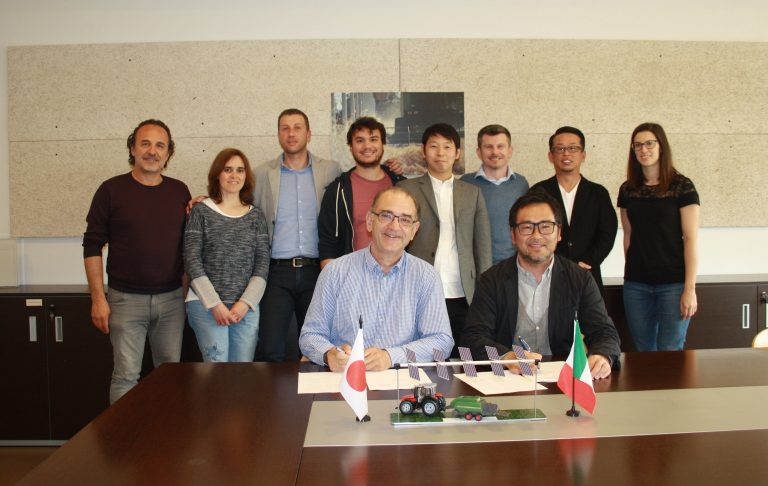 17/04/2019 REM TEC participated in Linea Verde  service dedicated to Piacenza, showing the Agrovoltaic plant of Castelvetro Piacentino. You can see our service starting at 38:40 at the following link: https://bit.ly/2He13IS

08/02/2019 With the Hearing held in The Hague on 17/10/2018 REM Tec obtained the revocation of the patent EP 2 811 819 filed in 2013 by the Fraunhofer Institute. Fraunhofer's patent referred to agro-photovoltaic plants for the simultaneous use of agricultural crops and production of energy from solar sources, claiming characteristics already present in REM Tec's AGROVOLTAICO® plants, installed in Italy in 2011 for a total of 6.7 MW. In addition, the use of agricultural land for the production of energy from solar sources in compliance with agricultural practices is present in the REM Tec proprietary patents that protect the AGROVOLTAICO® system and its applications.

December 18, 2018 REM TEC still focuses on research A new project is being carried out in collaboration with the Catholic University of the Sacred Heart of Piacenza as part of the Innodriver - Measure A call. The call is aimed at collaboration between SMEs and research centers for the implementation of innovation projects process or product.

Giugno 04, 2018 Great success for REM TEC at SNEC 2018 PV POWER EXPO which was held from 28 to 30 May in Shanghai. In addition to the interest received from visitors, REM TEC won the first prize as an innovative technology with the agrovoltaic greenhouse project, receiving the TERAWATT DIAMOND AWARD. 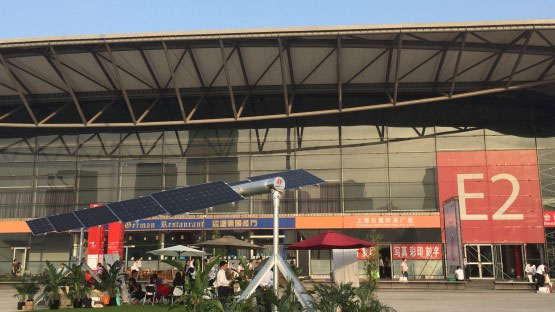 April 26, 2018 REM TEC will participate as an exhibitor at SNEC 2018 PV POWER EXPO, an important Chinese photovoltaic fair, to present AGROVOLTAIC technology to the Chinese market. About 1 year after the Agricultural diamoond prize 2017 received on the occasion of SNEC 2017, REM TEC will participate with its own stand at the 2018 edition. The fair will be held from 28 to 30 May 2018 at the Shanghai new International Expo Center.

April 04, 2018 Seminar "Producing energy for agriculture 4.0" Catholic University of Piacenza The seminar "Producing energy for agriculture 4.0" at the Catholic University of Piacenza was held successfully. Interesting topics were discussed regarding the new frontier of photovoltaics in the agricultural sector. The focus was on the Agrovoltaic® system. Soon the complete video of the event. Open the news to download the presentations of the event.

Febbraio 28, 2018 In a global context where food needs are getting higher, the loss of agricultural space for energy purposes needs to be limited. At the same time, electricity consumption is growing in almost all sectors, including agriculture. Therefore, the need to find alternative solutions emerges. The Agrovoltaic® technology developed by Rem Tec fits into the international energy scene, constituting the meeting point between the two main world needs: food and energy. The seminar aims to present the Agrovoltaic® technology and more generally the possibilities of using renewable energy in agriculture. Representatives of the Catholic University of the Sacred Heart, Climate-KIC, Aster, ENEA and Coldiretti will speak for a 360-degree overview of the topic

January 18, 2018 After four books of great success with the public and press on the green, Mondadori Università in co-edition with the Istud Foundation has produced the fifth volume in conjunction with Expo 2017 - Future Energy - held in Astana in Kazakhstan. The book "Future Energy, Future Green. For earth, water, air and fire" is a set of essays, a true Anthology of Green with an all-encompassing cut. These are some of the topics covered: from how to invest in the future of the world (water, food, infrastructure, green energy) to the more general issues of green and energy, to the more recent ones of the Sharing & Food Economy, green building, and therefore, circular economy, pop economy, circonomy, crowfunding and other topics. Rem Tec S.r.l. enthusiastically welcomed the invitation of the editors Maurizio Guandalini and Victor Uckmar (recently deceased) to write an essay entitled "When solar energy marries agriculture: solar panels for the cultivation of Japanese green tea ". Our Agrovoltaico® brand, in fact, is in accordance with the green policy: technological innovation while leaving the natural state of the land unchanged. Agrovoltaic technology makes it possible to transform maximum solar energy into daily electricity, even allowing an increase in agricultural yield thanks to the possibility of managing the shadow generated by photovoltaic modules. You can find it in all Italian bookstores starting from 18 January 2018! 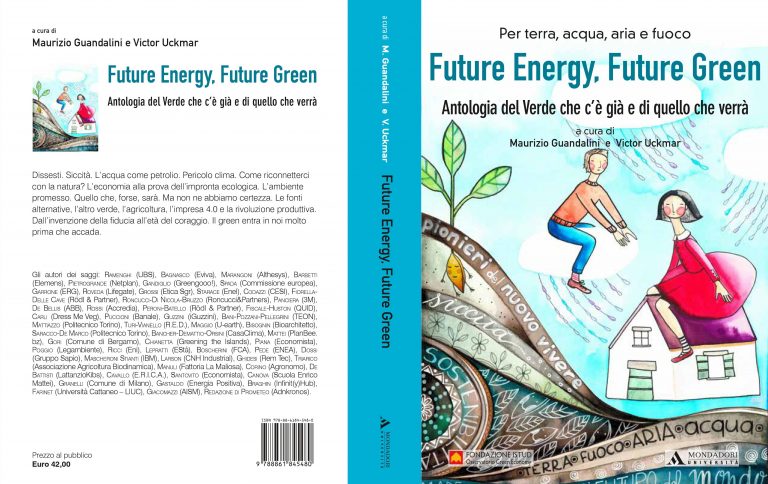 September 19, 2017 New contacts in China! Rem Tec has embarked on a new collaboration path with two Chinese companies active in the solar sharing sector: Beijing Rongkun Agriculture technology Co. Ltd. (Beijing Rock) and Ningxia Keda Institute of Agriculture PV Co. Ltd. (Ningxia Keda), with the objective of increasing the Agrovoltaic market in the Chinese territory. The agreement follows the collaboration started in 2015 with Nanjing Share Power, an important EPC, with the aim of expanding the application of Agrovoltaic technology in the North-East and North-West of China. These territories are characterized by some of the highest growth rates in the Chinese economy, especially the provinces of Ningxia, Gansu, Inner Mongolia and Xinjiang which are part of the important "One belt one road" strategic plan launched by the CCP for the next decade. . The territories of Northern China are between latitudes of 35 ° and 45 ° N and are characterized by dry continental climates, including semi-desert and steppe areas, offering a good level of solar radiation, which makes the location particularly convenient for use of biaxial tracking systems. At the same time, the soil is very rich in aquifers, especially in the fertile regions crossed by the Yellow River, thus presenting great potential for agriculture. the crops that are most favorable are vines, fruit trees, berries and vegetables: according to the studies conducted by Rem tec on Italian plants and laboratory studies of the Catholic University of Piacenza and the Agricultural University of Ningxia, these crops they are also the most convenient to be cultivated with photovoltaic systems, since the agricultural yield is not negatively affected by shading, but in some cases it can benefit from the dynamic shadow generated by the Agrovoltaic system. Ningxia Keda is currently developing large solar sharing plants in the provinces of Ningxia and Gansu in semi-desert territories convertible to agriculture, with capacities of several hundred MWp each. Beijing Rock is busy building even larger plants in Liaoning and Inner Mongolia provinces on sites converted to agriculture by local governments. Furthermore, the collaboration between Rem Tec and the new Chinese partners aims to create a version of an Agrovoltaic greenhouse, integrating the production of photovoltaic energy with water pumping, climate management in the greenhouse and hydroponic crops. Rem Tec's growth strategy in the East includes the identification of 4 partners to cover the vast Chinese territory (including the very promising South-Western Provinces of Sichuan and Yunnan), 1 licensee for Taiwan, the Republic of Korea, Japan and the Philippines , in addition to the availability of qualified local suppliers.

August 10, 2017 An MOU has been signed with RER Energy Group, a company active in the photovoltaic sector based in Reading, Pennsylvania. The collaboration will concern the development, trade and construction of the Agrovoltaic system in the United States and Mexico. RER is already active in the photovoltaic sector alongside agriculture and is interested in the development of new technologies in this field. 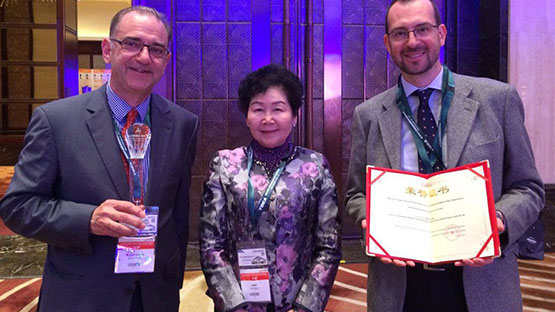 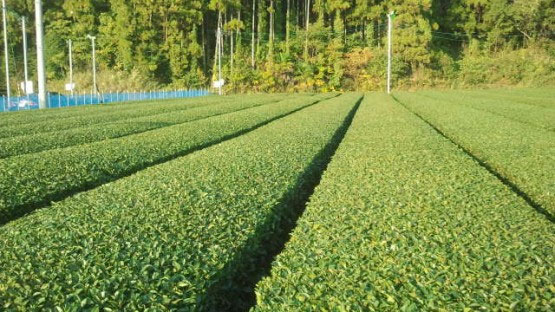 June 30, 2016 The Agrovoltaico® plant in Jinzhai (Anhui province, China) is connected to the network by SHARE POWER Co. Ltd. 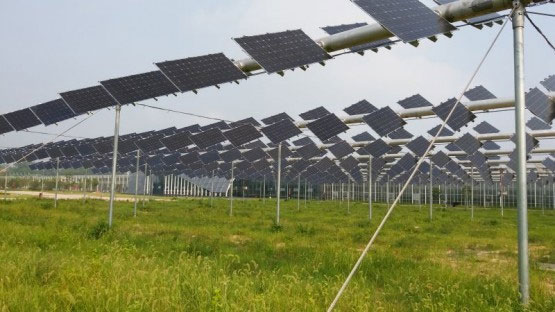 May 16, 2016 REM TEC will participate in the "International Solar Energy and Green Building Conference & Exhibition" which will be held from 23 to 26 May in Shanghai, together with the company SHARE POWER Co. Ltd. 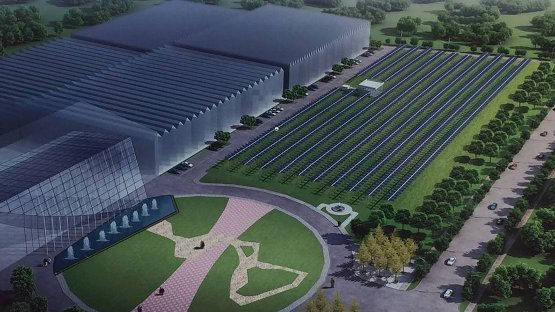 March 16, 2016 REM TEC has been selected by the EU PVSEC 2016 scientific committee, composed of 190 leading experts in the photovoltaic sector, for a presentation of the Agovoltaico® solution system, which will be held on 23 Giguno, 2016 in Munich, during the 32nd European Photovoltaic Solar Energy Conference and Exhibition. 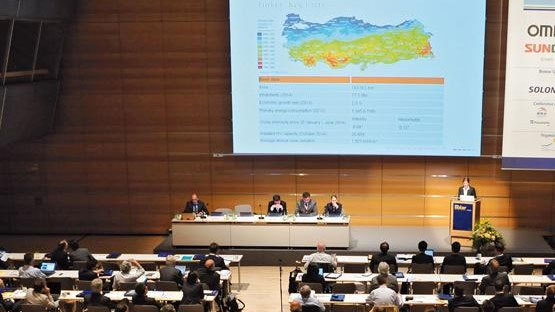